Shh… it’s that time of the month. ‘No, I can’t have intercourse,’ ‘I’m sorry, I can’t come out with you guys, I’m chumming,’ and many more excuses every one of you must have heard from one of your girl friends or even from your partner.

A very natural phenomenon every girl goes through every month from the age of 12-13 or to say, from the time she hits puberty to being a woman of the age 45-50, or to say when she hits menopause. 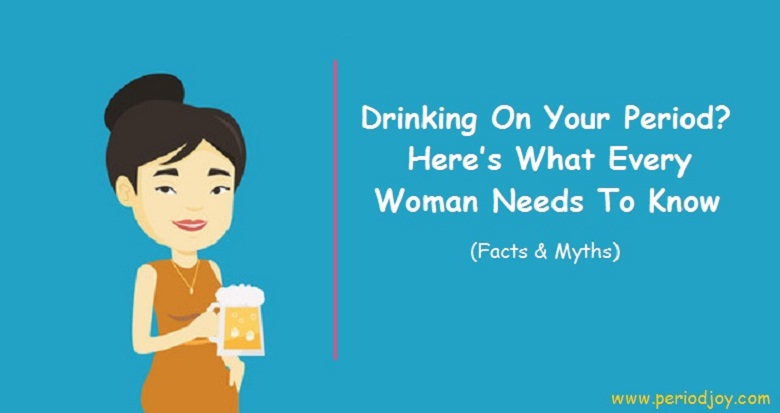 A physiological condition where the egg in the woman’s womb doesn’t conceive thus cracks and excretes the unwanted tissues along with blood. Sounds simple, eh? However, the process is much more complicated, messier, and painful.

With menstruation, there comes a lot of care and hygiene that a woman has to take to keep her well. Using the right products for her personal hygiene, eating healthy, and taking rest are some of the things that a woman should do.

However, a lot of women have a concern if they can consume alcohol on their period. Here, we are discussing and answering a few questions on what the right thing is and what are the myths associated with drinking alcohol and period.

Can you drink on your period?

Living in this era, every one of us is prone to bust our stress by consuming little or more alcohol or probably a cigarette. But the question is, whether or not you can drink or smoke on your period. Of course, you can. However, it is important to consider if it is wise to do so.

According to gynecologists, nutritionists, and research conducted, it is highly recommended to avoid consuming alcohol on your periods. However, consuming moderately, not more than a glass of alcohol should do no harm.

Does alcohol affect your period?

A lot of research has been conducted in this area to understand if and how the consumption of alcohol affects the menstruation of a woman. These research materials and resources suggest that alcohol does affect your periods in many ways. This is to say, it is advisable to avoid having alcohol on your periods.

The consumption of alcohol affects a woman in a way that she begins to have irregular periods. It can also make the premenstrual syndrome almost unbearable. Your emotions can take a toll and you might not have any control over them.

How about drinking beer during periods?

While you understand the effect of consuming alcohol during period, it is equally important to know what we can and what we cannot have. Beer is a beverage that is equally counted in alcohol, if not a hard liquor. With 4-8% of alcoholic properties, beer can cause equal harm to the menstrual cycle especially when consumed during periods.

Consuming beer on normal days leads  to a soar or dry mouth and throat, leading to dizziness and dehydration. Having beer during period can lead one to not be able to manage with the drowsiness. Thus, it is unwise to have beer during period, even though it is a soft liquor.

Does drinking on your period make you bleed more?

To say that the consumption of alcohol will lead one to bleed more during their period, cannot be completely true.

According to a research, there are various reasons why a woman might bleed more during her period. Some of the common reasons are irregular period, taking processed food items, and sometimes over-drinking alcohol.

Thus, limit yourself to having not more than one serving per day of alcohol, especially during your period. Also, stay hydrated and have a healthy diet.

Does drinking on your period make you feel more drunk?

Feeling higher than otherwise is not only linked with drinking alcohol during a period. There are various other reasons for it as well. Many medical practitioners claim that women as compared to men have a higher tendency to get drunk way quicker.

The number of glasses of whiskey you have or the kind of tequila you drink has very little to do with how quickly are you going to get drunk.

However, as mentioned, drinking during period does make you lose out on the tendency to retain water and also makes you feel dizzier than otherwise.

Does drinking alcohol stop your period?

This is one of the most often asked questions. Drinking alcohol surely has an effect on your menstruation but drinking alcohol doesn’t stop your period.

Upon the consumption of alcohol, one may notice a remarkable irregularity in their period cycle. For some women, the periods come as often as twice a month while for some women, it may delay to up to 2 months.

There are various other reasons for this irregularity. However, over consumption of alcohol is one of them. But, you’ll have to wait until you’re 35-50 to experience the pause in your menstruation.

However, one cannot say that drinking alcohol can be the sole responsible factor affecting the menstruation of a woman. It is one of the contributing factors. Alcohol reduces or increases the frequency of a woman’s period depending on the subjective bodily reactions.

With irregularity in the period, there are other effects that a woman might experience like, abnormal hormonal change, change in food habits, sleeping habits, and much more, all of which lead to reduced productivity in the daily life.

What are the effects of drinking alcohol during periods?

According to a research, alcohol affects the period. Taking alcohol may aggravate PMS symptoms and may increase the risk for prolonged cramping during menstruation. That is to say, consuming alcohol during your periods can worsen the cramps and extend the pain.

Another effect that alcohol has on your period is that it makes you crave more for sugar. During periods, the magnesium level in a woman’s body is generally fluctuating. Over and above these, alcohol only reduces this level more. This leads to feeling dizzier and wanting to eat anything and everything that is sweet in the world.

Keeping these points in mind, one can choose whether or not they want to consume alcohol on period. It is advisable to have a healthy and nutritious diet and also drink as much liquid as possible, especially during your period.

It is also wise to consult your doctor if you feel you are already going through abnormal period days or more cramps.